What Does It Mean When You See A Rabbit? 9 Meanings

Since the dawn of time, there is a belief that animals are associated with divine spirits. In polytheistic religions, every God had his totem animal which had great powers. Animals were considered powerful omens and their messages shouldn’t be ignored. If you’re encountering rabbit often you’re probably wondering what does it mean when you see a rabbit?

According to different cultures, seeing rabbits can symbolize many aspects of life, both negative and positive. Its primal meanings are fear, sexuality, abundance, and prosperity. Besides those meanings rabbit is associated with good luck, intuition, spontaneity, wittiness, and many more.

If you want to know more about this extraordinary spirit animal this short article will be helpful. After reading it you’ll find out what does it mean when you see a rabbit in different situations. Hopefully, you’ll have a better understanding of the spiritual significance of this marvelous creature.

No time to read? Watch the “What does it mean when you see a rabbit” video instead.

What does it mean when you see a rabbit? 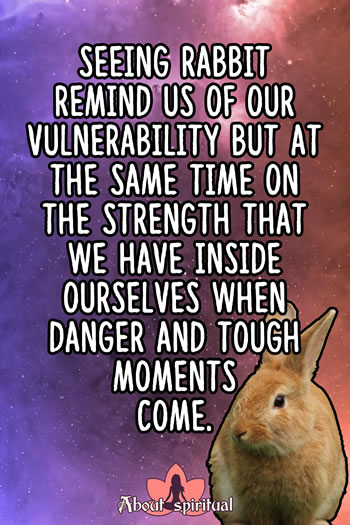 The rabbit is an innoxious and defenseless animal that is often targeted by many predators.

Foxes, dogs, cats, birds, and many others are chasing rabbits. They only survive by relying on their intelligence and speed.

Rabbits remind us of our vulnerability but at the same time of the strength that we have inside ourselves when danger and tough moments come.

These astounding animals are usually associated with Moon, because of their nocturnal lifestyle.

Their mystical appearance represents the idea of rebirth and entering into a new life.

In many ancient cultures rabbits as a spirit animals had an important place. Some tribes even used rabbits as an identification symbol.

For example, the Chinese Emperor had a rabbit as a sign of his house.

Also, in ancient Greek culture, the sacred rabbit was a speedy messenger of Hermes.

Probably you’re curious about what does it mean when you see a rabbit these days.

Seeing a rabbit in a modern culture means good luck. Many people have a rabbit’s foot as their amulet.

What does it mean when you see a white rabbit?

Seeing a white rabbit beside the usual rabbit meaning of luck has other symbolic meanings. They are a symbol of love, tenderness, and inner power.

In European culture, they are considered so lucky that encountering one means a real blessing.

There is an interesting custom in modern society linked with white rabbits.

People on the first day of the month are saying ‘white rabbit’ or just ‘rabbit, rabbit’ to guarantee happiness in the current month.

Dreaming about white rabbits symbolizes change and fortune in your life.

But, a white rabbit in the dream means those things only if you have the courage and you’re willing to take a step forward.

When you ask yourself what does it mean when you see a white rabbit have in mind that rabbits are clever animals who are fighting for their life only with their bravery.

They’ll mean love and blessing for you only if you are brave and persistent.

What does it mean when you see a black rabbit?

The black rabbit just like you probably expected has the opposite meaning of white rabbits.

If you saw a black one it means that you are under stress or maybe even feeling depressed.

Black rabbits symbolize fear and helplessness. Dreaming about them can remind you of family troubles and losses.

Black color doesn’t always mean something negative. According to some interpretations black, as a color, symbolizes stillness and silence.

Observing it in this way seeing a black rabbit could remind you that the peace comes with being still and silent.

Or depending on the context need to break the silence.

What does it mean when you see two rabbits?

Seeing something doubled, in this case, two rabbits means that symbolic meaning is even more powerful.

The symbolic meaning of number two is balance, choice, relationship, and judgment.

It can be that your spirit guides are trying to help you with clarifying the point in which you might be of ‘two minds’ about a decision or issue in your life.

In case you’re encountering two black rabbits and you’re wondering what does it mean when you see two rabbits have in mind that colored animals call out to our deeper feelings.

If they are dark that means that you have shadows on your thoughts and that your subconscious has messages for you.

Through two black rabbits, your guardian angel can send you a message to be more reserved in your dealing with others.

Sometimes two rabbits cross your path to let you know that from time to time we can find power deep down in ourselves, maybe even in dark places.

Rabbits are dear animals that many people adore and have as pets. A big amount of people keep their feet as an amulet for happiness.

Interesting thing is that rabbit’s meaning in almost all cultures is consistent, unlike other animals whose meaning changes from culture to culture.

Many modern cultures associate rabbits with spring. For example, in most European cultures rabbits are springtime animals that symbolize renewal and fertility.

Japanese culture sees a connection between rabbits and spring as well.

For Americans, just like for the rest of the world, rabbit bears good luck and devotion to self-improvement.

Chinese also consider rabbits as the luckiest of Zodiac animals.

However, in Native American cultures rabbits are seen as trickster animals.

Aztec mythology negatively sees rabbits as well. For them, rabbits are linked with drunkenness and promiscuity.

As we can see rabbit spiritual meaning in almost all parts of the world is associated with positive things.

Most people in the world believe that encounter with rabbits brings good luck in romance, family life, and finances. 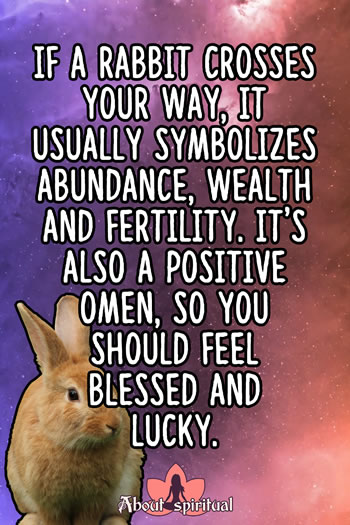 Since ancient times there is a strong belief that animals are associated with God.

People believed that God or divine spirits use animals to communicate with people on Earth.

Animals like owls, lizards, cats, spiders, deer, snakes, and rabbits were seen as powerful omens in the past. Many of those past beliefs exist today.

If you encountered the rabbit you may be curious about the spiritual meaning of the rabbit crossing your path.

In case a rabbit is your totem animal encountering it can mean that you can express feelings to other people.

People who have a rabbit as a totem animal usually can recognize opportunities fast and react properly.

This kind of creature is also associated with awareness. Having it as your totem animal probably means that you’re always aware of the danger.

Encountering rabbits could mean that you are a very shy person which has a lot of fears.

To make any progress in your life you should get rid of your fears or at least for a start to face them.

Spiritual meaning of rabbits in dreams

As we already learned rabbit symbolizes good luck, but also they are related to our internal success and control.

But do you know the spiritual meaning of rabbits in dreams?

Depending on the situation dreaming about a rabbit can mean a lot of different things.

Through this part of the article, we’ll find out more about messages that rabbits are bearing in most common dreams.

In case you had a dream about a dying rabbit that could be a sad omen. But also it can suggest a positive time that is associated with change.

Dreams with black rabbits are a symbol of the fear of intimacy. The black color is also associated with darkness in your life.

Rabbits that we can see in wildness are usually brown. Dreaming brown rabbit implicates that you are being grounded in life or you need to do so.

In case the brown rabbit was running in your dream that means you need caution in affairs of the heart.

Gray rabbits are associated with dishonesty. If you’re dreaming one that is a sign that you need to check is somebody in your surroundings being dishonest.

Our love life is associated with white rabbits. Having one in a dream can be a symbol of you being faithful in your relationship.

If you are hunting rabbits in your dream in real life that could mean that you are feeling as if you are “under attack”.

What does a dead rabbit symbolize?

Seeing a rabbit in a dream or reality as we learned is a positive thing. On the other hand, seeing a dead rabbit symbolizes quite opposite thing.

A dead rabbit is not good news. If you dreamt about a dead rabbit that can be a sign of loss.

It can refer to a loss in your love life or a loss in some other relationship in your life. Also, in a worst-case scenario, it can anticipate the death of your close person.

In case you had a dream with a dead rabbit try to remember all of the details since they are very important for a dream interpretation.

Details can completely change the entire interpretation of a dream.

The prophetic meaning of rabbit

We already mentioned that rabbits are differently seen in different cultures and religions. Depending on culture people looked at a rabbit in various ways.

The prophetic meaning of rabbit it’s important for disclosure meanings of this interesting mammal.

For example in Egyptian culture rabbit was associated with existence.

On the other hand, because of their lust, ancient Hebrews saw rabbits as unclean animals. (Deuteronomy 14: 7).

For the Algonquin Indians, the Great Hare is the animal demiurge.

In Chinese culture, the rabbit is one of twelve zodiac signs and it’s considered a thrilling star.

For people born under this sign Chinese say they have access to the Moon and they are sensitive and artistic.

There is the belief that a person who has a rabbit as his totem animal will have the same qualities as this mammal.

One of the most characteristic qualities of a rabbit is its reproductive capacity and quickness.

Through this short article, we found out what does it mean when you see a rabbit. We met with hidden meanings that this special spirit animal has in different situations.

In case you have any doubts or questions feel free to write us. Also, we’ll be glad to hear about your experiences.