White Owl Meaning: Learn About It’s Omen And The Messages It Has for You

Owls are often featured in myths, legends, and fictional stories related to magic, wizards, mysteries, and witches. The white owl is one of the most popular animals in such stories. People also thought white owls have supernatural abilities due to their nature. It might puzzle you if you spot a white owl several times in a few days. You would like to know the white owl meaning and what message this creature wants to deliver.

Don’t get afraid because there is no bad omen. It signifies transformation, change, and inner wisdom. People linked white owls to witchcraft and magic due to the nature of uncanny transformation. Owls play important characters in many spiritual beliefs of several cultures. It is trying to deliver a message from the spirit world if it appears time and again in your life.

Continue reading and you will reveal everything about white owls and the messages they try to deliver.

No time to read? Watch video instead


White owl meaning in the bible 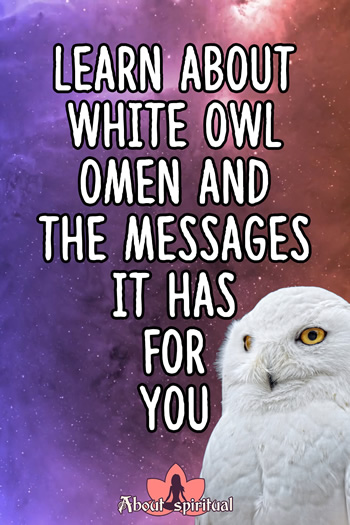 If a white owl continues appearing in your life or dreams, it is trying to convey an important message. Different cultures interpret that message in different ways. It can be a good or bad omen depending on the culture you follow.

However, most cultures across the globe believe that white owls are a symbol of intelligence and wisdom. It owns a flexible neck and large eyes, which make it special among all the other animals.

It is quite tough to describe the exact zoological meaning of white owl according to the bible. This bird appears with some other creatures in the texts of the Old Testament. The Old Testament features the owl as an unclean animal, which humans should never consume.

This bird inhabited the Palestine valleys and it destroyed cities, as depicted in the holy book. The bible says owls are the mother of ruins. Probably that’s why this bird appeared in topics related to abandoned cities.

Although there is no specific white owl meaning in the bible, owls, in general, are considered a sign of loneliness, darkness, isolation, desolation, and abandonment. People have derived these meanings from the events the Bible describes related to owls.

The holy book does not say that the white owl is a good or bad creature. It only lists this bird as unclean and unfit to eat for humans. Therefore, it is unfair to conclude anything related to the symbolism of white owls in the bible.

The bible features owls many times in many different parts. Sometimes it indicates a person who is lonely and desperate and sometimes it introduces owl as the only remaining creature after the destruction.

Owl survives after the destruction of Babylon along with other wild animals. All the meanings related to white owls were derived from such incidents explained in the bible. People believe that white owls are capable of turning into humans.

They can see what is going to happen in the future and some cultures also associate this creature with the moon and the night. It is a beautiful creature that does not mean bad in the bible.

The meaning of a white owl crossing your path is you are not grabbing opportunities that can change and evolve your life. It signifies you are letting big opportunities go due to the fear of failure. It also means you don’t want to leave your comfort zone to achieve something big in your life.

This incident also signifies that you fail to make tough decisions regarding ending things that are not profitable. It can be more painful if the universe steps in and make those tough decisions for you.

People usually learn such lessons when things go badly against them. The white owl crosses your path to alert you. It is your spiritual guide telling you to step up and take decisions that can improve your life.

The decision can be related to anything you find comforting but that is putting barriers in your life. For example, it can be your job that is fulfilling your needs but not providing enough to improve your lifestyle. You don’t want to quit because you are afraid you will lose what you are getting now.

Take some chances and make the tough decision to gain more success. White owl indicates that the time has come to make a change and the result will be positive. Do not afraid because the path is difficult but the outcome is more beneficial. 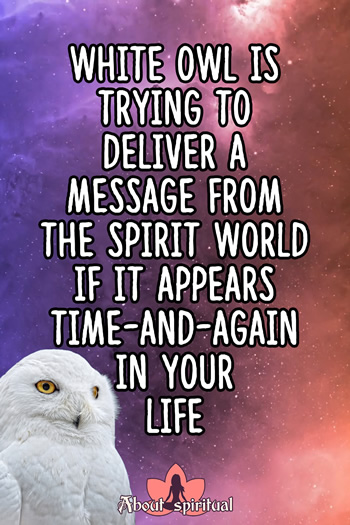 The animal symbolism experts believe that dreaming about owls is good for you. There are many types of owls roaming across the globe. Each one appears in your dream with a different meaning. Again, the white owl meaning in dreams can alter in different cultures.

We are describing the most popular meanings of getting a white owl’s sight in your dreams. White owls are also known as snowy owls. Seeing this creature in the dream symbolizes you will have important communications and discussions in your life.

You will put more effort into your work and learn you can do anything. Although the outcomes may not be exactly what you were expecting, you will reach your goal in the end.

Seeing a white owl in the dream also means you should avoid conflicts in the future. It signifies you may have many enemies and you should avoid them as much as possible to achieve success.

The white owls appear in your dream to encourage you to believe in yourself. It indicates you have a kind spirit and you are unique among others.

You can easily recognize a white owl in your dreams. Its yellow eyes, 20-28” in length, and 50-59” wingspan make it unique among other owls. It appears in your dream to boost your confidence and alert you against your potential enemies.

Although the white owl’s appearance in life or dreams is a good omen in many cultures, the Native Americans are not one of them.

The native tribes associated white owls with the death of a close person. This creature is a part of their stories, which were created to prevent children from roaming out during the nighttime.

The Mexican American folklore features this creature as lechuza. They thought it is a shape-shifting witch that hunts weak people such as drunkards, kids, and old people.

Some Native American tribes also believed that white owls are night eagles because of their ability to see during the nighttime.

Most of the native tribes believed that it is a bad omen if you hear an owl’s hooting during the nighttime. They created many bogeyman stores regarding this creature to scare kids. They taught kids that a white owl will come and carry them in the wild if they cry during the night time.

Some tribes also associated owls with ghosts. They thought that ghosts created bony circles around the owl’s eyes. The natives believed ghosts provided owls a special power to see during the night so that they can find weak people and the ghosts can prey on them.

All such stories make owls an unlucky bird in the Native American tribes. They were spiritual people, who strongly believed in animal symbolism and signs from the spirit world. White owl meaning Native American is not associated with good things!

If you believe in spiritual animals and symbolism, the white owl meaning at night is protection. This creature has come to you to indicate that your life will get tougher in the upcoming days. You have that white owl as your spirit guide, which will protect you against all sorts of mishaps.

People associate owls with both good and bad things in different cultures. Their hoot is considered scary due to numerous ghost movies and shows featuring that hoot when a ghost hunts people.
You should get a little alert.

To know hearing two owls meaning you should understand this creature’s symbolism in cultures. It comes with a positive omen from the spirit world. Most people believe that it alerts people against the dangers of the future and incidents that may harm you or someone close to you!

White owls are attractive and that’s why they have drawn people’s attention for many ages. You have learned everything about the white owl meaning and its importance as a spirit animal.

You might soon spot it in your dreams or real life if this bird has an important message to deliver from the spirit world.