What Does It Mean When You See An Owl?

Owls are truly magnificent animals. They are deeply involved in mythology and spiritualism. As a skillful hunter, covered by the darkness of the night, an owl is often called the Night king. It’s not a surprise that an owl is part of almost every folklore and cultural heritage. So, do you know what does it mean when you see an owl?

In the following article, I’ll explain to you what does it mean when you see an owl. I’ll give you some interesting facts about this magical creature and its symbolism. I’ll show you owls from different points of view. I hope you’ll enjoy it.

No time to read? Watch the “What Does It Mean When You See An Owl?” video instead.


What does it mean when you see an owl? 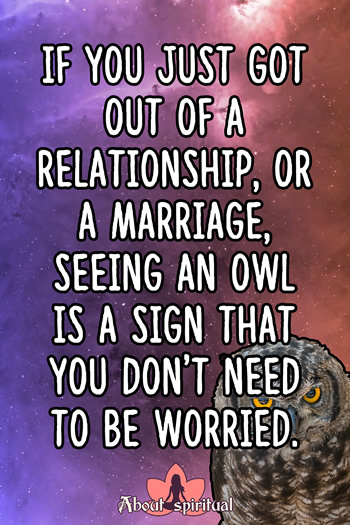 Do you see owls too often? Nor do I. But it doesn’t mean they are not around us.

They are just too good hunters to be seen too often.

Seeing an owl, especially during the day, is a very rare occasion.

An owl is a symbol of wisdom and deep, inner knowledge.

Owls have extremely sharp eyesight and just like an owl can spot prey in complete darkness, it will give you an insight and lead you through an uncertain period in your life.

Seeing an owl is a message that you need to be more curious and more courageous.

Don’t be afraid to step into the new adventure.

This powerful animal will show you the way, you just need to know how to read the signs.

In some ancient cultures, owls were treated as bad omens. They were symbols of upcoming death.

It may be a death of a close relative or the death of some famous person.

Furthermore, an owl is a symbol of change. They often appear if you are in a period of transition.

If you just got out of a relationship, or a marriage, seeing an owl is a sign that you don’t need to be worried.

A bad period is about to an end and you will experience a fortune event in the upcoming days.

What does it mean when you see an owl outside your house?

You may be in a period of transition. If you have a huge, life-changing decision to make, an owl is there to show you the way.

What does it mean when you see a white owl?

Due to that fact, these magical creatures are often connected with witches, wizards, and magic spells.

Even Professor Dumbledore, a headmaster of the wizarding school of Hogwarts, a school from the Harry Potter book series, had a white owl as a pet.

These books and movies contributed to the growth of the reputation of owls as wise and smart animals.

So, it’s not surprising that many people are asking does it mean when you see a white owl?

Here are just some of the interpretations:

A white owl is often treated as a messenger of change. If you see it, you can expect new events in your life.

If you’re having issues in your life, a white owl is a sign that you can expect some positive news.

Also, if you’re enjoying your life, you need to pay the attention to the forthcoming events, something bad could happen.

Just as white color, a white owl is a symbol of purity.

Seeing it is a sign that your spiritual energy is pure and clean and there is nothing to worry about.

You just need to keep your thoughts straight and you’ll reach your goals.

Many birds are often connected with the souls of departed ones.

If you see a white owl, it could be your guardian angel, sent from Heaven to tell you that you’re not alone in this world.

What does it mean when you keep seeing owls?

If you’re asking yourself what does it mean when you keep seeing owls, the answer is that an owl is your animal spirit guide.

An owl will lead you through uncertain times and be your guide through the new life chapter.

There are multiple channels of how your spirit animal is trying to communicate with you.

You can see an owl in its natural habitat, on the TV, in the newspapers, or on your cellphone.

However it happens, the message is the same: you aren’t alone and someone is keeping an eye on you.

Meaning of seeing an owl in daylight 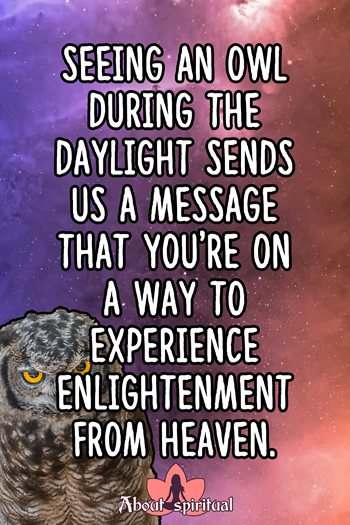 As great night hunters, owls are rarely seen during the daylight.

So, if you see one, you may consider yourself a lucky person.

There is more than one meaning of seeing an owl in daylight and all of them are positive omens.

Seeing an owl during the day is a definite moment to remember.

An owl is a symbol of wisdom and a day is related to the light.

So, seeing an owl during the daylight sends us a message that you’re on a way to experience enlightenment from heaven.

Seeing an owl during daylight is an extraordinary experience.

Owls are nocturnal creatures and being awake during daylight isn’t their natural behavior. Seeing it may be a wake-up call.

It sends you a message that you need to change your perspective about some live events.

You need to stop and think about those events.

Probably you’ll find out where are you making mistakes and this will be your moment of transformation.

What does it mean when you see an owl at night?

No matter how brave we are during the day, a night may be unsettling for us. Unlike human beings, most animals are active during the night.

Then it’s not surprising if you find yourself in the middle of the forest during the night to hear countless types of sounds.

One of them may be an owl’s hooting. You would probably ask yourself what does it mean when you see an owl at night?

Relax, there’s no need to worry. Although they are great predators, owls aren’t interested in you. On the contrary, they only can help you.

They will hunt mice, insects, and all the other pests. Also, its screech will scare even bigger animals away.

In other words, if you see an owl at night, you may consider yourself a lucky person.

What does it mean if an owl flies in front of you?

If an owl crosses your path and if you wonder what does it mean if an owl flies in front of you, there are a few theories about that, but all of them have the same answer: it’s a good omen.

If an owl flies above you

It’s a message that you need to see your life from a higher perspective.

Perhaps you are too close to your life events and you need to see them from a „bird’s perspective“.

Some obstacles may seem unsolvable to you, but you need to get a bigger, wider perspective and new ideas and solutions will come by themselves.

The owl is a silent, patient hunter. It can stand still for a longer period, waiting for the perfect moment to attack its prey.

You can learn a lot from an owl. It sends you a message that you need to be patient, to be confident about yourself and you’ll make the right decisions.

If an owl crosses your path

That’s a sign that you need a change in your life.

An owl is a symbol of a transformation and it’s telling you that you need to change your course.

Think about the decisions you have to make.

Listen to your heart, follow your intuition, and don’t rush and your success is guaranteed.

Be confident about your feelings and you’ll make no mistake.

If an owl crosses your path you may find a solution for the issue you’re dealing with for a while.

An owl is there to give you a new perspective and a new point of view. Just don’t rush.

Behave like an owl. Wait for the perfect moment and your issue will be a matter of a past sooner than you think.

What does it mean to dream of an owl?

The significance of owls mustn’t be ignored, even in dreams.

They are powerful spirit animals and they are always sending us strong messages.

Do you know what does it mean to dream of an owl?

If you dream of an owl, it means that your conscience is waking up.

Awake, you probably have a tough life decision to make and then, when you fall asleep, your conscience wants to send you a message.

An owl in a dream is telling you that you’ll find a solution for your issues.

Unconsciously, you’re revealing your emotions in search of an answer.

An owl will help you in that quest, it will bring you wisdom and a deeper perspective on your life.

Owls are cautious animals. They are hiding in the dark, far away from our eyesight.

If you dream of an owl, it’s a message from your inner voice.

You probably dug some thoughts deep inside yourself, wishing to forget them.

Now, your conscience wants to dig it out. Probably it’s about some issue that you don’t want to deal with.

An owl is telling you that the right time has come. Face your fears and deal with the issues.

You need to believe in yourself and everything will be alright.

Owls have been mystified throughout history because they are night hunters and they are always attacking in the complete darkness.

Many cultures believed that an owl is a symbol of death.

Also, during the Dark Ages, owls were connected to witchcraft and there was a belief that witches transformed themselves into owls, so they were unfairly hunted and terminated.

These days, owls don’t have such a bad reputation.

They are a symbol of change, transition, and a new beginning.

It’s treated as a wise animal and seeing it is a message that you’re growing mentally.

You’re on a way to changing your life perspective and goals.

An owl is telling you that you’re in a period of transition and you’re gaining new knowledge that will help you to reach your goals.

Owls are powerful spirit animals. They may not be the strongest and fiercest burds, but their influence shouldn’t be ignored. I hope you liked this article.

I have shown you what does it mean to see an owl, I described it from different aspects.

If you still have questions and doubts, just ask and I’ll gladly respond to you.