What does it mean when you see a black cat?

Cats are everywhere and people love them. What does it mean when you see a black cat? The answer is quite different than what you think. This charming little creature seems quite entertaining and moody. Have you ever imagined cats’ appearance can be a sign or a message? Although you never thought about that before, it has a hidden message and a sign for you. What is that sign? Let’s find out.

People have fabricated myths about black cats for many centuries. Some called them a sign of bad luck just because of their color. Thankfully, modern people don’t hate black cats as much as it was hated before. It can be loving and quite entertaining like other cats. There are folklores featuring black cats as a wonderful creature and also as evil. The Irish and Scottish people respected this animal. They believe it brings prosperity to your home. Other European cultures signified black cats as witches. Many thought they bring bad luck in our lives.

That is era has passed and there are no more witches in our world now. Let’s find out more regarding what does it mean when you see a black cat to better understand black cat symbolism.

No time to read? Watch the video instead? 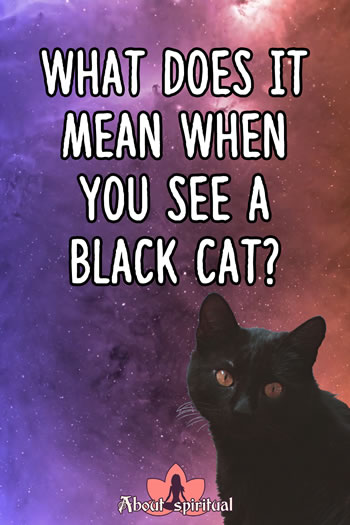 There are many cat species. A black cat is not one of them. It is not a species, but just another cat with black color fur. Have you ever heard a black cat superstition? You may have heard one or two popular ones.

This feline pet is way more beautiful and luckier than you have ever thought. Most of the people change their path when they see a black cat crossing it. That is not the right thing to do because it is your lucky day.

Many people in the US and some European countries don’t mind when they see a black cat. They consider it a good omen, but there are some negative superstitions about black cats. It is considered a bad omen if a black cat crosses your path.

That day is not lucky for doing anything big. You should reschedule your plans to avoid unnecessary risks. They call this cat is bad luck. It is believed to be a witch and a symbol of evil things.

Pope Gregory IX is responsible for cat superstition origin. He had decided that black cats are evil creatures and they were used for devil worshiping. That’s how this creature got a bad reputation in the middle ages and that continued for a long time.

Black cat’s vilification was limited to European countries for a long time. It spread across the USA and Asian countries. Things got worse during the Salem Witch Trials when black cats considered witches. Many of them were captured and killed during that time.

People did not believe black cats can be a symbol of good luck, prosperity, and love. They ignored it for a long time. Even though many Christians were hunting black cats, the Scottish people feel blessed if black cats entered their house. They still believe it brings prosperity and good luck in their lives.

I have always found black cats fascinating. Although they have some attitude issues, it does not make them bad. They are as impressive as other cats. That’s why people started taming this cute creature.

Black cat coming to your house

Cats have influenced our civilization for a long time. People worshiped, coveted, and feared them for thousands of years. They were considered disguised witches during the middle ages. Today, it is much safer because people love to pet cats.

However, people still believe in black cat symbolism. Many meanings are associated with this creature. Its entry in your home also has a meaning. Do you know what does it mean if a black cat coming to your house? Let’s find out.

The Scottish people and inhabitants of Northern England believe that black cats bring a fortune in your life. If you open the door and a black cat standing or sitting there, it is a sign that you will get a lot of money. People have believed in this superstition for many ages.

Should you let that cat sit on the door until it wants? Let it be there as long as it wants because it won’t let any rat roam around your home. If you scare and turn that cat away, it can be a bad sign.

That black cat may take your good luck away. Therefore, you should let it enjoy there as long as the cat wants.

Seeing a black cat on a full moon

Many superstitions are associated with the full moon. It is a unique scenario that lured mankind since ancient times. It is believed that the moon’s different stages affect people’s behavior. Many scientists researched to find the facts, but they did not reach any conclusion.

Cats also behave differently with different stages of the moon. Nobody knows why but that does not cause any harm to the humans or their owners.

The full moon always reminds us of the werewolves, but people don’t know the meaning of seeing a black cat on a full moon. Is it something like the myths of werewolves or something else? As explained earlier, people have associated black cats with good luck, bad luck, and witches.

Cats don’t care if it is daytime or nighttime, they wander wherever they want. Therefore, you can see a black cat roaming around the streets on a full moon. People believed it is the witch roaming in their streets as a black cat during the middle ages.

Should you get close to a black cat on a full moon night? It is believed bad luck during the middle ages. Some people still believe that black cats are witches, but thousands of people have this creature in their homes.

They obviously live there at the full moon and homeowners don’t see any witch. So, it is not bad luck. In fact, it can bring good luck in your life if you keep your black cat happy, whether it is a full moon or not. 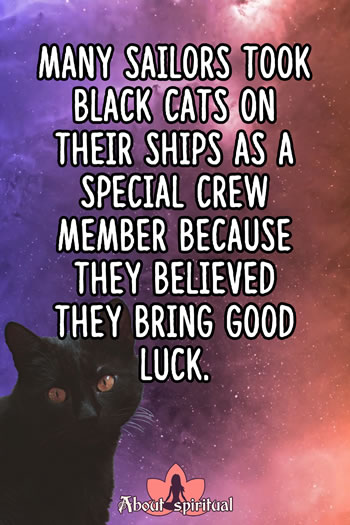 There is a different spiritual meaning of seeing a black cat in different cultures. Cats have spent many centuries around humans. Nobody knows why people linked black cats to magic and witches, but that superstition haunted mankind since the middle ages.

Many sailors took cats on their ships as a special crew member because they believed cats bring good luck. There were black cats on many ships and the sailors earned a lot of money! Therefore, black cats became a symbol of good luck for sailors.

Many people thought black cats are goddesses and many believed they were witches. People thought it is a witch who came back from hell to take her revenge and hurt people. Witches actually kept black cats during the middle ages.

They left their pets on the street once they flew from the cities. Therefore, people thought black cats were those witches and they captured many such cats.

A black cat crossing your path while driving

They believe it will make things worse if you are going to do an important thing, like going for an important business deal, interview, etc. The cats don’t know what you are doing or where are you going. They scavenge all the time, but superstitions are also there.

However, British, Scottish, and Irish people don’t mind. They think black cats bring good luck to your life. It signifies that you will get a lot of money very soon if a black cat crosses your path.

All European citizens do not believe in such good luck. Many think black cats bring bad luck and it is not good to spot a black cat while driving or roaming on the street.
Is seeing a black cat good luck?

The Americans, Indians, and people from some other parts of the world do not want a black cat to cross their path. It is bad luck for them. As you have read before, there are different superstitions in different countries.

The Japanese, British, Irish, Scottish, and some other people think black cats are lucky. Now, you might ask “is seeing a black cat good luck or bad luck?

It mainly depends on which tradition you follow. Black cats are no different than other cats because they do all the things the same as other cats. It is their color that makes them unique and probably attractive to thousands of people across the globe.

Don’t worry about good luck or bad luck because black cats are believed to be lucky and unlucky in different cultures.

You have probably seen a black cat or it has crossed your pat recently when you were planning to do something important. That happens all the time and many people worry about this incident. We have explained all the different meanings associated with black cats.

Now you should understand what does it mean when you see a black cat. The meanings are different for different people. You should not worry a lot because black cats won’t cause any harm to you.
Also read:

Orange Butterfly Meaning: Is It Lucky or Unlucky for You?
Next Post: What Does It Mean When You See A Ladybug?