What Does It Mean When You See A Cardinal?

All birds are deeply connected with spiritualism. A cardinal isn’t an exception. Since the dawn of time, this magical bird was part of symbolism and mythology. It was a part of many folklores all around the world. So it’s not surprising if you see it often and if you’re asking yourself what does it mean when you see a cardinal?

In many ways, the red cardinal can be a spiritual messenger. Their message could be a simple acknowledgment that your loved ones are always around. Cardinals can have many different other meanings as well. Most of these meanings are positive ones and are related to their axial nature.

In the following article, I will show you what does it mean when you see a cardinal. I’ll present to you this magnificent creature and its spiritual meanings. You’ll find out if this magical bird is your guardian angel. I hope you’ll enjoy it.

No time to read? Watch the “hat does it mean when you see a cardinal?” video instead.


What does it mean when you see a cardinal? 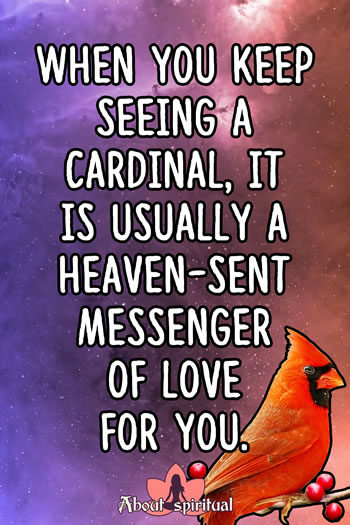 Spiritual signs are everywhere around us, we just need to know where to find them and how to read them. Angels are trying to communicate with us in different ways. Birds are one of them.

If you see a cardinal and if you’re asking yourself what does it mean when you see a cardinal, I’ll tell you that this beautiful bird always brings you positive spirit messages. I’ll present you just some of them.

A messenger from the spirit world

All the birds are considered as messengers from another world. A cardinal is not an exception.

One of the reasons is the Latin root of its name – a word cardo means an axis, a matter, or point which everything revolves around.

Due to this fact, cardinals are viewed as the connector between the human and spiritual world.

Cherokee Indians simply called a ‘red bird’. Their folklore says that a red bird is a daughter of the Sun.

The other Native Americans believed that a cardinal is associated with the change of weather.

Also, some Native American tribes believed that the red color of a cardinal is a harbinger of war and the red color symbolized war.

Cardinals are well known for being faithful partners. They carefully pick a mate and they are staying with him for good.

If a partner dies, they are greaving and they are staying alone ’till the end of their life. Seeing a cardinal is a message that a person who sees it is a loyal, truthful partner.

Souls of departed ones

According to many cultures, cardinals are messengers from departed souls. Our beloved ones are trying to communicate with us and they are doing it through these magnificent birds.

Cardinal angels. There are seven archangels in Christianity. Four of them are known as the Cardinal Angels. Their names are Uriel, Gabriel, Raphael, and Michael.

Having that in mind, cardinals are treated as guardian angels and messengers from heaven.

What does it mean when you see a female cardinal?

It could be a bigger or a smaller event, but you may expect it in the sooner future.

What does it mean when you see two cardinals?

Cardinal is a strong messenger, but do you know what does it mean when you see two cardinals?

Seeing these magnificent birds in pairs is a clear wake-up call. They send you a message that you need to pay more attention to the world around you.

You need to stop for a moment and look around yourself. If you have too many thoughts on your mind and you are too busy with day-to-day issues, seeing two cardinals is a message that you are not paying attention to important things.

You probably neglected your partner and your family and their needs.

Meaning of red cardinal at window

Cardinals are powerful spirit birds. They are always bringing some news to you, wherever you see them. The meaning of the red cardinal at the window is that you’ll receive a piece of good news or a sign of good luck in the recent future.

Native Americans believed that the number 12 is a sign of good luck. Since a cardinal usually lays 12 eggs and they are all-year-round birds, it’s believed if you see it on your window, it will bring you a stroke of luck during the next 12 months.

Aside from positive omens, there is one, the less popular belief that a red cardinal at your window could be a sign that someone in your enclosure may pass away soon.

What does it mean when you see a cardinal in your yard?

From ancient times cardinals have been a symbol of better days, it was a symbol of light in dark times, or warmth after a cold, long winter.

What does a red cardinal mean spiritually?

Different civilizations have various interpretations of cardinal symbolism. What does a red cardinal mean spiritually depending on the national folklore and heritage all around the world?

Native Americans had a belief that red cardinals are the souls of their ancestors.

Since they are non-migrating birds and they are staying at one location during harsh winters, some tribes even chose them as totem animals and gave spiritual sacrifices to them.

After years of observing and studying, ornithologists made a conclusion that cardinals are loyal mates. Once they find a mate, they are staying with him for life.

Therefore, Native Americans believe if someone spots a red cardinal, it will bring him a relationship soon.

Red cardinals are beautiful creatures. Some cultures believe if you see it in your enclosure, it’s a sign of good luck in the upcoming future.

The red cardinal is a harbinger of better days after a long, dark period.

Ancient Greeks and Egyptians viewed the red cardinal as a phoenix bird. It’s a symbol of rebirth and a new beginning. They were observed as a symbol of changes.

Some of them even believed that cardinals were announcers of upcoming wars and turbulent times.

What does the red cardinal symbolize at Christmas? 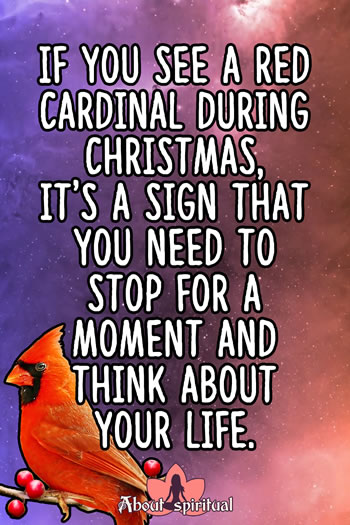 Christmas is a special time of the year. Christians are always trying to find divine messages and higher perspectives during this holiday.

Do you know what does the red cardinal symbolizes at Christmas?

Birds are one of the ways of communication with heaven, and red cardinals are one of them. Their red color is closely connected with the blood of Christ.

They are reminders that we should be more forgiving and more gentle to ourselves and our beloved ones.

If you see a red cardinal during Christmas, it’s a sign that you need to stop for a moment and think about your life. If you have issues with your partner and your family, try to resolve them.

Forgiveness is the key. Talk to them, forgive them and you’ll make your life easier and better. Some issues may seem unsolvable but they are not, you just need to see them from a different angle.

There’s almost no culture in the world that doesn’t have a red cardinal in its mythology. However, a red cardinal spiritual meaning is the most present in Christianity.

These birds are even got the name of catholic cardinals and their red robes. Cardinals are reminding us that we need to be more forgiving and to show love to the people around us.

Red cardinal symbolism is also present in numerology. This beautiful bird is deeply connected with the number 12. They are staying at one place for a whole year or 12 months.

A female cardinal usually lays 12 eggs, so there’s a widespread belief that a red cardinal will bring a fortune to your home all year round.

Red cardinals are romantic creatures. Male red cardinals are always trying to impress a potential mate. That’s the reason why a male cardinal has stronger and shinier colors in its feathers.

He will spend days trying to impress the desired female and once he manages to get the female’s attention, he will stay with her for good. So it’s not surprising why the red cardinal is a synonym for romance and faithfulness.

I hope you enjoyed this article. Now you know what does it mean when you see a cardinal. I tried to describe this magical animal from different aspects and in various situations.

If you still have any doubts and questions, please, don’t hesitate, ask questions, leave a comment, I’ll be glad to answer all your questions.

What Does It Mean When You See An Owl?
Next Post: Angel Number 545 Meaning: Start A New Chapter With Courage And self-belief