What Does It Mean When You See A Blue Jay?

Seeing a blue jay around you repeatedly means that divine forces have a message for you and you shouldn’t ignore it. Together through this article, we’ll discover what does it mean when you see a blue jay?

After reading this article you’ll have a better understanding of the messages your guardian angel is sending you through blue jay. Special circumstances bring different interpretations of blue jay appearance, so with this article, we’ll cover the most common situations with blue jay.

No time to read? Watch the “What does it mean when you see a blue jay?” video instead.


Seeing a blue jay – what does it mean? 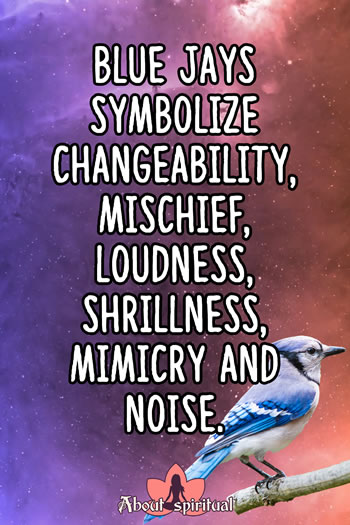 Before you continue reading this article you should know that the blue jay is one of the spiritually most powerful birds.

Their spiritual meaning and symbolism hidden behind their appearance is something we shouldn’t deny. Blue jay can inspire, motivate and enlighten you.

In the wilderness, blue jay survives thanks to its courage and fearlessness. When their nest is in danger they are ready to defend it even from the larger predators. In those situations, they are extremely smart and focused.

When blue jays are making their nests, they are no too much picky. They can adapt to every type of environment and we can agree that’s a trait of intelligent creatures. The interesting thing about blue jays is they often irritate other birds.

They disrupt all other birds with their raucous calls, but members of their species appreciate their loud nature as Blue Jays also announce the presence of danger that way.

Having all that in mind seeing a blue jay is symbolizing changeability, mischief, and noise. Blue jays are also known for their ability of mimicry which they often use when in danger. They can easily mimic the call of red-tailed hawks.

*If you click this link and make a purchase, I earn a commission at no additional cost to you.

What does it mean when you see a blue jay in your yard?

On the question of what does it mean when you see a blue jay in your yard answer is quite simple. The universe is telling you that you’re on the right path and you should keep going that way.

Although, they can be a warning sign for you to pay attention to important aspects of your life.

What does it mean when you see two blue jays?

Seeing two blue jays singing to one another is anticipating a romantic relationship with a person who has similar beliefs and thought as you.

In case you already have a partner and ask yourself what does it mean when you see two blue jays, the answer is that you’re going to bond strongly with your partner, discovering a new aspect of him or her.

What does it mean when you keep seeing a blue jay?

Everything that’s happening repeatedly has some deeper meaning, seeing blue jay constantly is no exception. If that’s happening to you it’s normal if you are wondering what does it mean when you keep seeing a blue jay.

In case blue jay is appearing near your home or even makes its home near yours, divine forces are sending you a message that you’re on the right path. Blue jay staying near you for some time means that you should continue following your dreams.

What does it mean when a blue jay crosses your path?

You have nothing to worry about if you’re wondering what does it mean when a blue jay crosses your path. Seeing blue jay brings a lot of good vibes. Don’t forget to watch them, since they’re bringing positive motivation and good luck.

Spiritual meaning of a flock of blue jays

From time to time it happens that we see a flock of blue jays. In this section, we can find out that the spiritual meaning of a flock of blue jays is there to remind us that even though we believe we have independent thoughts, we usually have beliefs imposed by the environment.

The flock of blue jays appears in front of you as a reminder to separate your thought from assumptions you have unconsciously.

What does it mean when you see a cardinal and a blue jay?

In rare situations, it happens to see a red cardinal and blue jay at the same time. If that occurred to you, you’re probably curious what does it mean when you see a cardinal and a blue jay. Seeing those two birds together mean they are guiding you spiritually.

The red cardinal is appearing there to transfer the wisdom from the spiritual world and to provide you protection and guidance.

On the other hand, the blue jay is a symbol of curiosity and intelligence. Having all that in mind seeing both birds means all those things combined.

What do blue jays represent?

If you wondered what does it mean when you see a blue jay with its mate, here’s the answer: they are a symbol of loyalty. They are finding a mate once in a lifetime. Once they find a partner they stay with him all their life.

For that reason, the blue jay is seen as an animal spirit that can represent lasting bonds between two people. Blue jays are a symbol of faithfulness and accord.

Those marvelous birds are deeply associated with loyalty, solidarity, and understanding. As a spirit tied to the Air Element, Blue Jay also represents your thoughts and intelligence.

In case you find a blue jay’s feather it means that you’re going to experience a turnaround of some sort, expect things to go better for you. The feather also represents healing.

Whatever is happening in your life currently remember the power of self-care. Try to care about yourself as best as you can. Do things that make you happy, meditate, walk, reed, etc.

Seeing a bird in a dream or reality is a good sign, especially if that bird is a blue jay. Birds are usually signing of good luck and blue jay brings even better vibrations.

The spiritual meaning of seeing a blue jay is deeply associated with boldness. This incredible bird doesn’t have a lot of friends and that’s why blue jays need to stand up for themselves and be bold. They make loud noises to communicate and to scare enemies.

We can all learn from blue jays and start saying things loud to another. We can’t be afraid all the time what will other people say. This bird is a symbol of communication and her color is matching the throat chakra.

You should be bold as blue jay and follow your inner voice and speak up. Blue jays are not afraid to attack if it’s necessary, that way they encourage us to be forceful.

A spiritually, blue jay is often seen as a symbol of clarity. Encountering it reminds us to be honest on our path and to follow our plans without letting anything stop us.

Sometimes for success, we need to speak over others and exert ourselves with extra vitality and without shyness, just as blue jays do.

What does a blue jay symbolize? 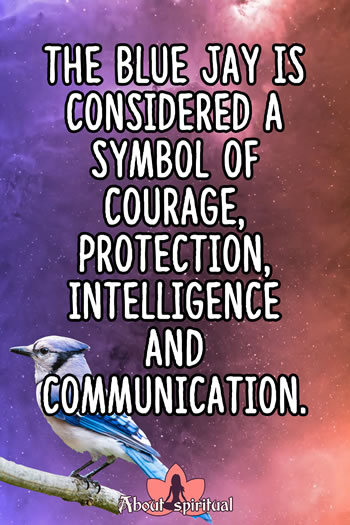 We already know that blue jay is considered a symbol of courage, protection, intelligence, and communication. In case blue jay is your totem animal that means that you’re a determined and intelligent person as well.

It’s a widespread belief that blue jays are also a symbol of clarity. That belief is common because a bird has a feather in the color of a clear sky. Just as the clear sky is blue with white clouds, blue jay’s feathers are also in those two colors.

The sky is known as a symbol of clarity and so do blue jay. After seeing blue jay you should also sense clarity. All the challenges you’re struggling with currently will be done and you’ll feel peace again soon.

A blue jay is a powerful totem animal. If you receive a message from a blue jay, it’s an indicator that you’ll be able to defeat your opponents and overcome all challenges you are facing.

This beautiful bird is a symbol of truth, so seeing it is a powerful message that you are a truthful person and you’re walking on the right path.

Among Christians is a widespread belief that seeing a blue jay in a home or yard brings good luck. In Christianity, symbolism blue jay tells you to be a fighter in life no matter how hard it is.

People often find themselves in situations beyond their control. When that happens we should persist and not give up, just like the blue jay.

Even though there is no direct affirmative answer in the Bible on a question is seeing a blue jay good luck, Christians believe that an encounter with this extraordinary insect is a positive omen.

The biblical meaning of seeing a blue jay is to communicate well, persist, and plan for the future. Encountering is also associated with fearlessness and protection.

Now, after you read this article you’re having a better understanding of what does it mean when you see a blue jay. We covered this topic in detail and that can help you to have the right interpretation of the appearance of the blue jay.

If you have any questions or you want to share your experience, please write us.

Angel Number 1313 Meaning: Be Open To Receive New Ideas And Creativity
Next Post: What Does It Mean When You Dream About Frogs? The Powerful Meaning