What Does It Mean When God Sends Cardinals?

Who didn’t like Red’s character in 2016’s The Angry Birds movie? It was angry and quite heroic until the end of the film. Do you know the real-life Reds are also heroes and angels? Yes, we are talking about the red cardinals. This beautiful bird is believed to be a visitor from heaven. God sends it in your life with a message. So, what does it mean when God sends cardinals?

People always considered cardinals a symbol of beauty in the darkness. Another popular belief is that your departed loved ones reappear in your life as cardinals. This beautiful red bird has been around humans for ages. Different cultures interpreted their presence in different ways.

However, now we seek a globally accepted meaning. You want to know what does it mean when God sends cardinals in your yards. So, let’s explore the answer.

No time to read? Watch video instead 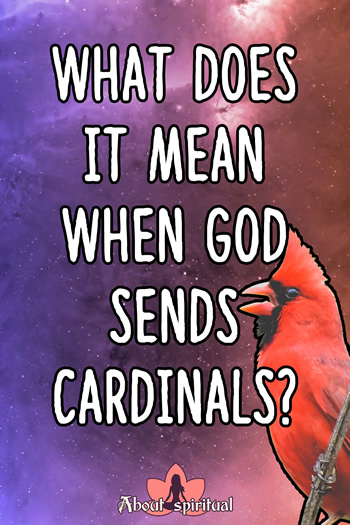 It is believed that birds are a symbol of the Holy Spirit. The Holy Spirit’s renderings usually include two elements of red flames or white light.

A white dove is believed to indicate peace and purity and red cardinals symbolize the fire and vitality of the existing spirit.

The red cardinal also represents Christ’s living blood. Vitality is believed to be everything in Christianity. Both blood and cardinals are considered signs of vitality.

The Christians have always believed that red cardinals indicate restoration, life, and hope. Thus, it has become a living faith.

Its appearance in your life is an indication that there is hope! Even though the current circumstances are quite bleak, despairing, and dark, God is with you.

The red cardinal biblical meaning unveils many interesting Christian beliefs. It is the symbol of Jesus Christ. It is called the sign of the living blood and the high authorities in the Christian community are called “Cardinals”.

A popular biblical belief is that red cardinals are god’s messengers. It has come into your life to indicate that your loved ones are thinking about you.

It appears from the spirit world to tell you that your departed friends and family members still remember you.

I conducted extensive research and tried to find texts related to this bird in biblical texts. Amazingly, I did not find anything.

However, some scriptures explained objects or crimson red creatures. These scriptures talk a lot about red color, but not directly about cardinal birds.

Now you might wonder how did people associate red cardinals with the bible. What Does It Mean When God Sends Cardinals? This bird got associated with the bible because of its appearance.

As mentioned earlier, red cardinals are believed to be the sign of Christ’s blood. Many Christian community-related websites pay high respect to this bird.

It is an important creature for many clubs that believe it indicates Christ’s blood. That’s how the red cardinal became an important bird for spiritual people.

Many other cultures believe red cardinals are the messengers of the divine entity and they convey messages from heaven to the earth. 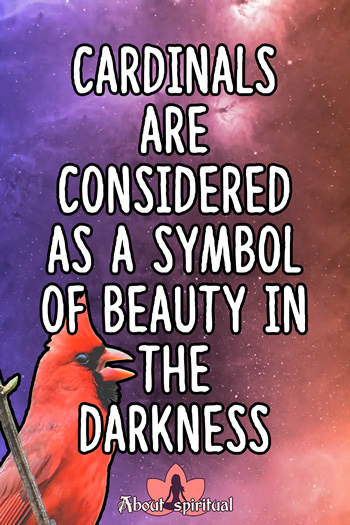 Your search for red cardinal catholic meaning will reveal some interesting catholic beliefs. There are two birds an essential part of the Holy Spirit’s rendering, dove and red cardinals.

Flying red cardinals does not represent the god himself, but the trust that the living blood of Christ exists.

We should glorify him and enjoy his existence to get rid of our sins. Catholics have always associated cardinals with Christ due to their color and attributes.

Ancient people used the word Cardo exactly the way we use “key”. It simply means vital, crucial, main, and significant. Hence Christ is the key figure for the catholic community, they also consider it the Cardinal key to understand god’s mysteries and get more knowledge about the divine entity.

Christ personifies the hinge element in the catholic faith. Cardinis is a popular word used as the hinge of the door, which comes from the word Cardo. This word represents axis or hinge in the Latin language.

Thus, it becomes something on which everything else is dependent and something very crucial. Every person in the catholic community believes in Christ. He is crucial for them and the entire world depends on his existence.

Christ is not someone like the Atlas, who held the entire globe on his shoulder. He is the axis of our world and the world will not exist without its axis. The Cardinal word also symbolizes the heart.

The heart is called Cardium in Latin and that word comes from Cardo. You must be thinking of how a hinge (Cardo) is associated with the heart. The way the hinge dictates the motion of the door, the entire movement of a person depends on his heart. Thus, these two words are associated.

Just like the heart, Christ dictates the existence of humanity. The sacred heart of Christ is full of love and it resides in all of us. Cardinal is not just a word for Catholics.

It is associated with the supreme power and that’s why red cardinals are often regarded as the god’s messenger and his symbol.

The cardinal bird prayer is quite meaningful and emotional. This prayer says:

This prayer is said when you see a red cardinal. It is God’s messenger and it will convey your message to the Holy Spirit.

This prayer means, you are asking God to give you calmness for accepting things you have gotten. You cannot change everything and this fact should not hurt you.

You are seeking courage from God to take tough decisions to make the required changes for everybody’s wellbeing.

You are praying to God for the knowledge to differentiate good and bad things. That’s what the cardinal bird prayer says.

You are not worshiping this bird when you say this prayer. The god has landed in your yard through his messenger and allowed you to communicate directly through that bird.

It is your chance to seek aid from the divine entity and that’s why you should say the serenity prayer of the cardinal bird.

All religious individuals respect red cardinals. It is their faith that cardinals carry their messages to God. They admire this beautiful bird and pray to this bird.

You have learned all about “What Does It Mean When God Sends Cardinals”. Now, it will be quite tough to ignore this bird if you want to get in touch with the divine entity.

What Does It Mean When You Dream About Snakes? Meaning & Symbolism
Next Post: Orange Butterfly Meaning: Is It Lucky or Unlucky for You?