What Does It Mean When You See A Bluebird? 8 Special Meanings

Bluebirds are very special animals. With their extraordinary color and beautiful voice, they can’t be unnoticed. If you saw one in physical form or a dream, you’ve probably thought about how beautiful she is. But did you ever asked yourself what does it mean when you see a bluebird? Do those marvelous creatures have a deeper meaning?

Reading this article you’re going to find out more about this terrific bird from thrushes family. The first thing you notice on a bluebird is her sky-colored feathers, but this is not the only special thing on her. Positive sentiment is always attached to a bluebird!

Let’s see is a seeing bluebird a good sign for you and check its exact meaning. Maybe you’ll take a different point of view on your everyday struggles.

No time to read? Watch the “What does it mean when you see a bluebird” video instead.


What does it mean when you see a bluebird in the winter?

Navajo and Iroquois tribes have very special spiritual meanings for bluebirds. Iroquois Tribe believes that bluebirds are spirits that drive away from the God or demigod of winter.

The Navajo tribe has the same belief and they also use to sing bluebird songs before the sunrise at the end of their winter ceremony.

What does it mean when you see a bluebird in your dream? 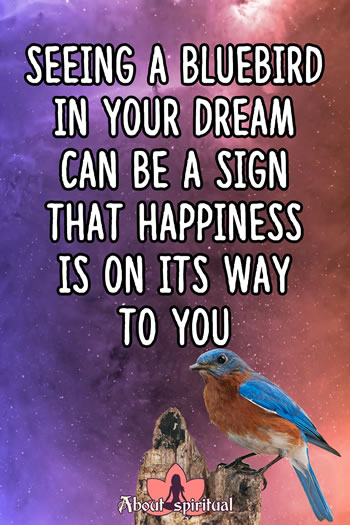 People since ancient times are trying to better understand their dreams. There is a multitude number of a theory of dreams and their meanings. Here we’re going to see how we can interpret dreams with bluebirds

Seeing a bluebird or its feather in your dream can be a sign that happiness is on its way to you. Bluebird’s meaning is all around a stroke of good luck.

So, don’t be afraid to make that decision. By visiting you in your dream bluebird confirmed your choice. Your new resolution will lead you on your path to happiness.

There is a belief that a bluebird does not visit everybody, just special people, selected by the angels.

Spiritual meaning of a bluebird in Christianity 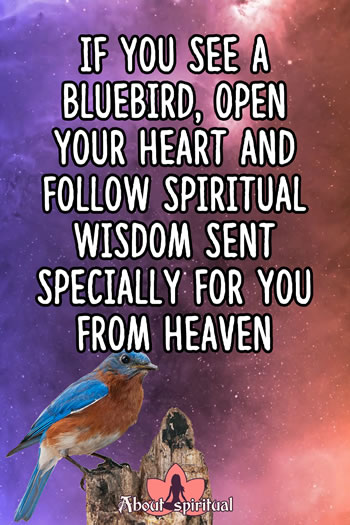 By that belief, it’s considered that bluebirds are messenger sent from the spiritual realm. So, next time you see this magnificent creature open your heart and follow spiritual wisdom sent specially for you from heaven. Listen carefully to their cheery song.

Their presence can indicate that your angel guardian is with you. So next time you spot a bluebird pay extra attention to yourself, the things that surround you and the state of your life.

Think about all things that bother you while you carefully listen to bluebird’s song. You should be able to recognize the symbolism of the bird uniquely to you. The message you’ll receive will be of great importance and it can improve your life on so many levels.

What is the spiritual meaning of a bluebird?

Bluebird is a messenger of good news. But, did you ever asked what is the spiritual meaning of bluebird? It’s closely attached to positive vibes, joy and happiness. It reminds you that you should enjoy your life.

Bluebird is often considered as a spirit animal, who brings messages from the spirit world. It’s always related to positive outcomes and prosperity. Whether it is good health, happiness, pleasure, or any other good vibe, be sure that a bluebird will bring it to you.

Bluebirds are closely connected with the spring, so it’s not surprising that it’s the universal symbol of happiness. Bluebird of happiness spiritual meaning can be found in Native American history.

The symbol of a bluebird as a harbinger of happiness can be found in many cultures and may date back for thousands of years.

In Russian culture bluebird represents hope. On the other hand, this tiny bird in China’s Shang Dynasty was a messenger of knowledge and enlightenment. In Lorraine culture, it was a symbol of happiness and it’s deeply involved in their mythology.

What is the spiritual meaning of a bluebird in Native American culture?

Pima Native Americans had the belief that if a bluebird takes a bath in a mountain lake, its feathers turn water into blue color, and pushes clouds away.

The Cherokee tribe’s mythology was also connected with a bluebird. They believed that it’s associated with the wind, and even believed that it can predict and control the wind.

For some other tribes, it was closely related to the Sun. Due to its blue color, it was a symbol of dawn, of a new day, a new beginning. According to the Cochiti tribe, Sun’s firstborn child was named after a bluebird.

The blue color stands for a clear sky, deep blue water and positive vibes. So it’s not surprising that bluebird totem animal can be found in almost every folklore.

Bluebird totem animal also stands for monogamy and romance. Just like a bluebird finds one soulmate for nesting up to the end of its life, it’s a sign that you are a mature person, willing to make your soulmate happy.

If you have a tough period in your life, a bluebird as a totem animal could be a wind of change. It’s a deeper message that a new person will enter into your life. Just like the Sun rays shine after a heavy rain, bluebird brings you some better news after miserable times.

The importance of a bluebird is undisputable. It’s a living personification of joy and happiness. If you wondered what does it mean when you see a bluebird, now you know that this beautiful bird will make you happy.

If you see a bluebird, it will make you smile and it’s not a coincidence. They are divine creatures sent from Heaven to make your life better.

Write to us about your experiences with bluebirds or ask for more information. We’ll be more than happy to help you.