What Does It Mean When A Dragonfly Lands On You? 9 Symbolic Meanings

Meet dragonfly – a gentle giant old as dinosaurs. Although today’s dragonfly is multiple times smaller than the one from the Permian one, which had a wingspan of almost one meter, it’s still one of the largest flies on our planet. But did you ever asked what does it mean when a dragonfly lands on you?

The dragonfly symbolizes a transformation. Its metamorphosis starts in the water. As it grows it flying out of the water and continues to live in the air. If a dragonfly lands on you it could be a sign that it’s the right moment for a change in your life.

Just like the dragonfly changes its colors, if a dragonfly lands on you, it could mean that you need to see your life from a different perspective.

Now that you know what does it mean when a dragonfly lands on you, check more dragonfly spiritual meanings below.

No time to read? Watch the “What does it mean when a dragonfly lands on you?” video instead.


What does it mean when you see a dragonfly? 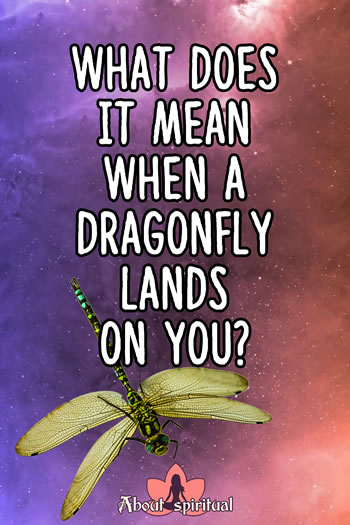 If you take just a brief period of time to observe a dragonfly, to watch its elegant dance through the air, you will realize why these elegant animals have always been present in mythology.

Ancient civilizations have different perspectives on the symbolic meaning of a dragonfly. Cherokee Indians believed if they see a dragonfly before the battle, the outcome of the battle will be positive.

In Japan, the dragonfly symbolizes strength, courage, and victory. That’s why they chose it as a national symbol.

In some ancient pagan cultures, they were a symbol of evil. They called them the ‘devil’s needle’. It was a myth that dragonflies are sneaking into bad children’s houses during nights and sewing up their mouths while they sleep.

Dragonfly is one of the fastest insects on our planet, flying up to an astonishing 60 kilometers per hour. So if you see a dragonfly it could bring you fast change in your life.

What does it mean if you keep seeing dragonflies?

Dragonflies are like a rainbow, you can see them in any color shades that you imagine. But what does it mean if you keep seeing dragonflies over and over again?

It could be a wake-up call to bring more diversity into your life. Like the dragonfly smoothly and quickly changes its flying direction, you need to make new steps in your life. If you seeing the same animal multiple times, the universe is trying to send you some message and that message shouldn’t be ignored.

Dragonflies are gentle giants, flying around smoothly in a turbulent environment. We can learn a lot from them. Seeing dragonflies often is a message that we should have a relaxed and smooth approach to our life challenges.

What does it mean when a dragonfly visits you?

From ancient times people were thrilled by the dragonflies. That’s why they inspired people to give them a name – the dragon. So, what does it mean when a dragonfly visits you?

Don’t worry! If a dragonfly visits you, it is a good sign. It indicates good luck, prosperity, harmony and fortune. This tiny animal tells you to live your life with full potential, to live every day like it’s the last one.

What does it mean if you see a dead dragonfly?

What does it mean if you see a red dragonfly?

Our beloved ones are sending a strong message to us that we are not alone in the world and, at the same time, reminding us of the presence of death.

What does it mean if you see a dragonfly in your house? 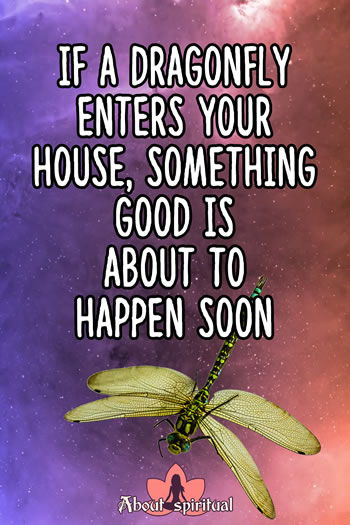 Yes, it’s summertime! Unfortunately, warm days are always been followed by insects entering your house. What does it mean if you see a dragonfly in your house?

No! Don’t reach for a broom or mop to kill it or to push it out. This little fella is a symbol of change. It’s a messenger of good news. If a dragonfly enters your house, just smile. Something good is about to happen soon.

If you are concerned about something or dealing with some issues, a dragonfly in your house is a sign that you will see the end of the tunnel. Wrong choices are about to an end and you will see a new perspective in your life.

Just like a dragonfly spreads colors around, your life will be enriched with a new, brighter perspective. So, don’t kill it and don’t underestimate the message it’s sending to you.

What does it mean if you see a dragonfly in a dream?

It’s a sign that you reached mental stability and you are ready to enter a new chapter in your life.

According to some other studies, it could be a warning sign. If you see a dragonfly in a dream, it’s possible that someone close to you is hiding something from you, or the truth is being kept from you.

Like dragonfly often changes direction, dreaming about it could represent instability of life and a turbulent period in front of you. It’s definitely a sign to pay more attention to your surrounding, but don’t be worried.

Walk through life smoothly and gently just like a dragonfly flies over troubled water.

If you ever wondered what dragonfly spiritual meaning is, you can find interesting theories in almost every ancient civilization.

Native Americans observed dragonflies as messengers of Gods. Mostly because of its beautiful colors, it was believed they are divine creatures.

Old Greeks believed they represent transformation and change. They even gave names to them. Dragonfly belongs to the Odonata order. It was believed, because of the way they crushing its prey, that they have strong teeth. That’s why they are called dragonflies today.

It’s not surprising that dragonfly is deeply involved in symbolism. Dragonfly’s spiritual meaning is also a shift to self-realization. As you observe these gracious animals you see how easily it flows through the air, no matter how strong winds are.

If a dragonfly is your spirit animal, it definitely means that you are a mature person, able to understand the deeper meaning of life.

After you lose someone in your life, you are facing a tough emotional crisis. Native Americans considered dragonfly spiritual meaning after death is a message from the dead ones. They believed that a dragonfly is the reincarnation of a dead person.

Even today, it’s a widespread belief that dragonfly is a messenger from Heaven, that our beloved ones sending us a message they are okay and they are watching on us.

What we’ve learned about dragonflies?

Now we know it’s not just an insect, it’s much more than that. It’s a symbol of change. It’s a strong message that you will face some positive changes in your life.

It’s deeply connected with the light and with its extraordinary colors it symbolizes different life perspectives, just like a dead dragonfly stands for potential trouble.

Now you know what does it mean when a dragonfly lands on you. So, when you see it, don’t kill them, don’t push them away. If it’s in your surrounding, you are a lucky person.

What Does It Mean When You See A Ladybug?
Next Post: Biblical Meaning Of Seeing A Blue Jay: Is It A Good Sign?