Shark Symbolism & Meaning: The Symbol Of Power And Superiority

Sharks are one of the oldest animal species on Earth. Some studies say that they were on our planet in the age of dinosaurs. The fact that they’ve survived up to today speaks for itself and tells us how adaptive and skilled animals they are. But sharks are much more than that, they have an important role in spiritualism and secret symbolism. It can be interpreted and explained from different angles, so let’s find out more about shark symbolism.

A shark is a symbol of power and superiority. And not just that, sharks are often connected with self-protection, authority, perception, and mysticism. Sharks are famous for their sense of smell, they can smell prey within more than 6 miles. Thus, a shark teaches you how to sniff the perfect opportunities in your life.

This article will give you some amazing facts about sharks and shark symbolism. So, please, continue reading and find out how it’s related to your spiritual life and how it affects your behavior.

No time to read? Watch the “Shark symbolism and meaning” video instead. 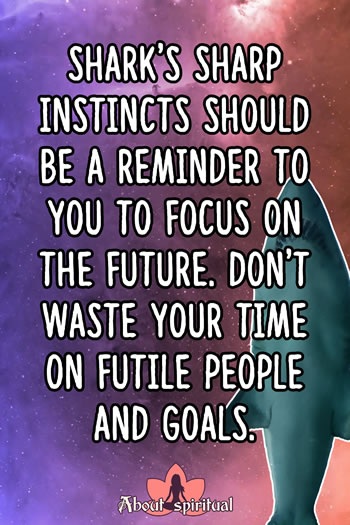 Share it on PinterestSharks are one of the most frightening animals on Earth and there isn’t a single person that isn’t intrigued and scared by them.

Therefore, sharks have their own place in spiritualism. Shark symbolism and meaning can be explained in 5 specific ways.

Sharks are powerful animals. They roamed seas about 500 million years ago and they’re still doing it today. It’s not a coincidence.

They’re on top of the food chain and they cause fear wherever they appear.

Fast, adaptive, and aggressive predators, they manage to survive in almost any sea and they’re the ultimate symbol of protection.

If a shark is your spirit animal, it indicates that you’re protected by a higher force.

At the same time, it tells you to protect yourself and the people in your enclosure.

You’re under the influence of angelic forces and you should take full advantage of it.

When you connect with a shark as your spirit animal, you’re receiving the energy and guidance needed to flow swiftly through unstable waters.

It brings you a sharpness of mind and the ability to react quickly in a certain situation.

Many fishermen communities are using sharks as guides for fishing. And it’s for a reason, sharks are extremely skilled predators and they can smell prey within miles.

All the fishermen need to do is to follow the sharks’ tray and they’ll lead them to swarms of fish.

There’s the same analogy for a shark as your spirit animal. It tells you to listen to your inner voice and you’ll find the best solution for yourself.

Sharks are known as one of a few fish species that can’t flow. Therefore, they’re predestined for lifelong swimming and constant movement. It makes them extremely tough and durable animals.

It’s known that some species, like the Greenland shark, can live even up to 250 years, most of the all animal kingdom.

A shark as your spirit animal indicates that you have an urge to keep moving forward. You’re always thirsty for a new adventure and you have ambitious plans.

Shark’s role in your spiritual life is to boost and maintain that urge and drive you forward.

Sharks are powerful animals. Wherever they appear, they set the dominance and authority.

Some species, like the Bull shark, the Tiger shark, or the mighty Great White, are famous for their dominance and authority in seas worldwide.

Their aggressiveness brought them to the top of the food chain and, besides humans, they don’t have natural enemies.

If you connect with a shark as your spirit animal, it reminds you of your need to set authority in your enclosure.

You have to show the attitude to anyone who doubts your goals. That’s the only way to earn the respect of others.

Have you ever seen shark hunting? It’s an absolute masterpiece of nature. While focusing on prey, it dives deep into the darkness and waits for the perfect moment.

Once the moment comes, it rushes from depths towards the surface with an immense power that prey doesn’t have any chance of surviving.

Shark’s sharp instincts should be a reminder to you to focus on the future. Don’t waste your time on futile people and goals.

You need to set your goals properly and focus all your attention to figure out how to accomplish them.

Hammerhead shark is one of the most unusual fish species. Though they look scary, they’re not aggressive. On the contrary, they’re protecting swimmers and surfers from other aggressive sharks.

Therefore, hammerhead shark symbolism can be explained as protection from divine forces. It grants you strong and healthy children.

Great white sharks are in constant movement through the water, that’s the way they’re getting oxygen from water.

Great white shark symbolism is related to new beginnings and opportunities. It indicates that you’re in a constant quest for new adventures and thrills.

Sharks are one of the fiercest killing machines. They have razor-sharp teeth and their teeth are so famous that they have a special place in spiritualism and mythology.

Shark tooth symbolism is rooted deeply in Hawaiian folklore, as well as many other traditionally naval and fishermen folktales.

According to the Old Hawaiian culture, Hawaiian warriors wore a shark tooth as a necklace and it provided them protection from evil forces.

The fishermen also wore shark teeth because they believed that teeth are providing them with fine weather and a calm sea.

Fishermen believe that shark teeth have the power to give them fruitful fishing. They believe that a fish tooth will move their boats towards fish swarms.

Shark teeth are especially popular as jewelry among surfers. Many surfers believe that shark teeth are preventing shark attacks so they’re wearing them as a necklace or a bracelet.

Traditionally, they wear one tooth on a leather necklace or a fisherman rope.

In the ancient days, many naval civilizations used shark teeth as tools. Since they’re dangerously sharp, people have used them as tools, making spurs and knives out of them.

This craft is still popular in Hawaiian folklore, but, though it still can be used as a tool or weapon, it’s mainly used as a part of the cultural presentation.

The prophetic meaning of shark

Sharks are ruthless and cold-blooded killers. Their aggressive behavior and outstanding survival instinct promoted them into one of the best predators on Earth. 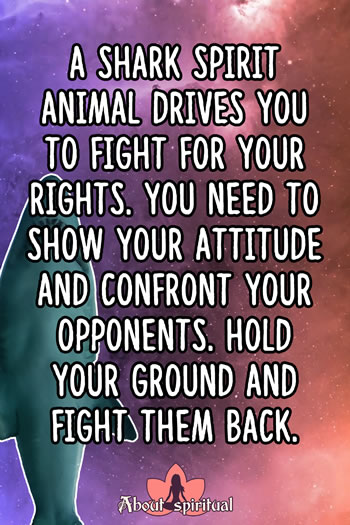 Share it on PinterestUnlike many other animals, a shark spirit animal represents power.

Shark as your spirit animal represents your inner urge to set dominance over the people in your enclosure.

A shark spirit animal drives you to fight for your rights.

You need to show your attitude and confront your opponents. Hold your ground and fight them back.

You need to act like a shark: aggressively and ruthlessly.

That’s the only way to earn others’ respect and set dominance over them.

If you connect with a shark as your spirit animal, you need to listen to your senses as guidance towards your goals.

Sharks are one of the best predators in the whole animal kingdom and you need to learn something from them.

You need to trust your instincts and listen to your inner voice. Those are serious messages and you shouldn’t ignore them.

Sharks are teaching you to be wise and patient. Just like the shark calmly swims through the water, waiting for the perfect moment to attack the prey, you need to be patient and wait for your moment to shine.

Some goals require the perfect timing to achieve them. You need to stay focused on your goals. No matter what’s distracting you, don’t lose your focus.

Your journey won’t be easy and you’ll face many challenges, but that’s exactly where you need to use shark instincts.

Show the power of will and sharpness of mind, that’s the only way to overcome any challenge.

What do sharks mean in dreams?

Sharks are fierce predators and dreaming of them can be a terrifying experience. Still, dreaming of sharks doesn’t necessarily have a negative connotation.

So, if you’re wondering what do sharks mean in dreams, here are some of the most common shark dream meanings.

If you’ve dreamed of a shark attacking you, it could be a bad omen. An attacking shark may bring you an illness or an accident in the future.

Some other people believe that a shark attack may indicate that you need to face your opponents.

Shark circling around you

If you’re dreaming of a shark circling around you, it also could be a bad omen. A circling shark may indicate that you’re surrounded by more than one issue and you’re in an unenviable situation.

Shark swimming towards you

If a shark swims towards you in your dream, it’s a sign of upcoming danger in real life. In other words, prepare yourself for upcoming troubles.

If a shark rips off your leg in a dream, it’s a warning sign to be careful with your life choices,

If you’re fighting a shark in your dream, it’s a voice of your consciousness, telling you to face the issues in real life. It’s a wake-up call to get out of your comfort zone and start fighting for yourself

Catching a shark in a dream is a good omen. It symbolizes your ability to overcome your current life issues.

Some people are born under the shark totem. If you’re one of them, you’re a person full of deep emotions. They’re also full of energy and self-confidence.

If you’re one of them, it’s a sign that you’re aware of your capabilities and you’re able to control your life.

A shark, as your totem animal, boosts your energy and drives you forward towards new life adventures. Once you become aware of it, great events will start to happen in your life. A shark is there to prepare you for changes.

Sharks are also a warning sign. They’re reminding you to keep your eyes open and focused on your goals. A lot of hidden dangers are ahead of you and you need to sharpen your senses.

Sharks are powerful animals. Despite their poor eyesight, they’re extremely skillful predators and they’re a symbol of power.

If you connect to a shark power animal symbolism, it will give you the strength to overcome upcoming difficulties.

Sharks are in constant movement and they’re able to swim for days without food. Thus, its symbolic meaning drives you forward towards new adventures.

Once you connect to a shark as your spirit animal, you’re ready to turn the page and start a new chapter in your life.

Hawaiians are tattooing sharks on their bodies, believing that they will give them health and protection from evil forces.

Surfers also gladly tattoo sharks. They mainly do it for two reasons:

Just like sharks are managing to survive in different conditions, sailors with shark tattoos are encouraging themselves to overcome bad weather at sea.

Indigenous people of Australia and New Zealand also tattoo their bodies with sharks. This was their way of scaring away evil ghosts and encouraging themselves before they went to battles.

Even today, they’re tattooing their bodies with sharks as a part of the tradition and cultural heritage.

I hope I brought you closer to sharks and their role in your spiritual life. These powerful animals are deeply rooted in spiritualism and you need to be aware of them as spiritual animals.

If you still have any questions about sharks, please, don’t hesitate, leave a comment and I’ll gladly respond.